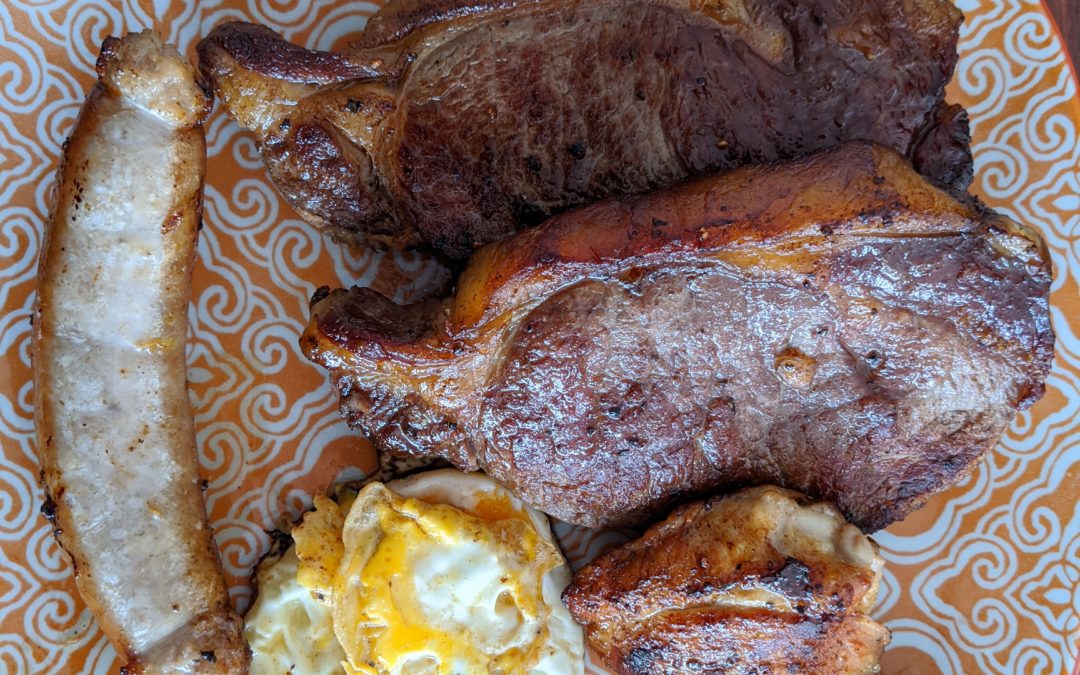 Well… that was another tough night. Went to bed at the end of Q&A, so I must have been well and truly under the sheets by 22:30. Lay there for some time with my heart beating out of my chest, my thoughts racing, and absolutely no chance of sleeping. So I got up, drank some more water, read the whole internet, and finally got back to a restful state by about 01:00. Not sure if that was because of the long black I had around 16:30, or if it’s just a change in my energy, but I’ve been nothing but exhausted so far in this whole stay-at-home Dad stint until now.

The other interesting thing I noticed this morning was a complete lack of pain. I went to the osteopath on Monday for some back and hip issues I’ve been having, and while I was there we were discussing the intense pain I’ve been having in my forefoot since moving to Colac. The osteo called it Metatarsalgia (front foot soreness!), and said it’s very common when people change their gait due to say, pushing a pram for 5-6 kms a day. My feet have been aching every night, and the first thirty or so steps in the morning are quite unbearable. He squeezed the sides of my foot together to demonstrate the pain, and said it would be something I’d need to manage (much like the plantar fasciitis that I’ve become accustomed to as a regular feature of life). This morning all the foot pain I’ve been experiencing has gone completely, even when squeezing my feet as he did. No plantar pain either. Not sure if I can attribute it immediately to the carnivore diet or not, but I’m absolutely delighted!

Meal One:
– 2 x 250g porterhouse steaks
– 1 x chicken thigh fillet
– 1 x pork sausage
– 1 x fried egg (made a real mess of this one, but I guess when you’re eating a plate of grease it doesn’t really matter!) 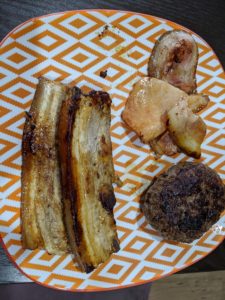 Thoughts: Feeling pretty good all round. Too many variables to control to know what’s attributed to what at this stage, but the foot and back pain that has been causing me grief are all but gone, so whatever caused it (be it slabs of dead flesh or just time) I’m just bloody delighted not to be in pain.

I think I probably overdid the food today. I have always had a bad habit of over-catering, as you can probably tell. I think I had probably one porterhouse too much for lunch. Dinner was pretty good. I’m working roughly to a ‘one kilo of meat per day’ kind of plan, I’m just not actually weighing anything! Still, finished the meals thinking, “I can always leave some leftovers for later”, and cleaned the plate without too much trouble. I had my ‘cousin’ over today who’s a doctor, and she most quite bemused by the whole scheme. I made sure to make her a side salad with lunch and some veggies with dinner so as not to impose my stringent regime upon her.

Gotta give a shoutout to Mid West Meats – everything has been fresh, juicy and delicious. Maybe any old road kill would have impressed me after 18 months off, but I’m pretty sure what they sold me is really hitting the mark. My wife and guests seem to agree.

No action on the bathroom front since yesterday’s meagre offering. Not going to stress – wherever it is going, I’ve already dropped a significant amount of weight so play on. I’ve made sure to check my pyjamas in the morning just in case something happened that I was not privy too, but again, we’re clean as a whistle.

In the morning, despite a good 12 hours of fast at that stage, I felt a really clean, surging, humming kind of energy in my body. Could be psychological, but I feel like energy has been constant, though I did have an afternoon dip around 16:30, after running Kora around at the pool for an hour. I think that’s normal right?! I didn’t want to chance another coffee lest I couldn’t sleep again. All in all… very happy at this stage to munch on with the experiment. I’ll need to grab a whole lot more meat out of the freezer as I’m going through it quickly. For the time being, despite initially planning some fish days, I’m going to keep going full steam ahead with red meat. I figure there will be a time when I desperately want to mix it up, so I’ll save the fish options for then.