Day 4: Livering on the Edge 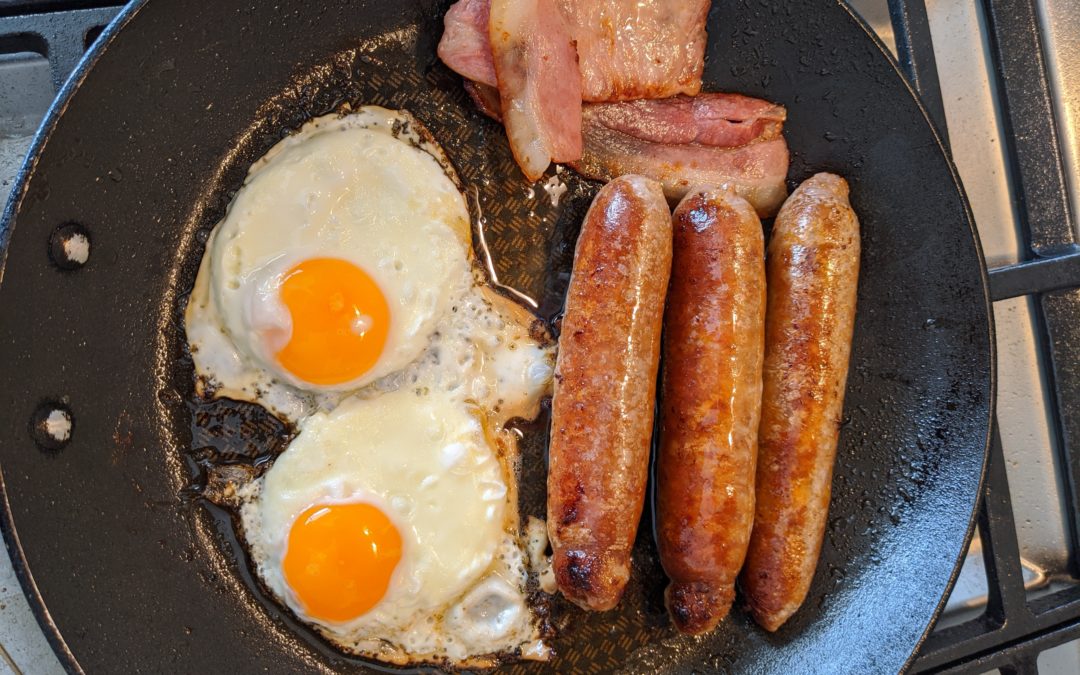 Last night was interesting. I did some work on my computer after dinner, and plonked myself on the couch around 21:00. Seemingly all of a sudden, my foot pain returned, as did some aching in my hips. Nowhere near as bad as it was previously, but it was quite striking as I hadn’t done anything to aggravate it I thought. Then again, I guess I walked barefoot to the pool (from the car park), and spent the rest of the day shoeless inside. Hard to know what that’s all about, but I’ll keep monitoring it. This theory of lowered inflammation is one of the major reasons the carnivore diet interested me, so I’ll be delighted if it indeed has an affect.

The poop-curious will be delighted to know that I had some success this morning! Nothing of great substance – probably the size of a small kipfler potato at best, but it was at least a Type 4 or 5 for those familiar with the Bristol chart. I didn’t really need to go… I just have some anxiety about going out to Rhyme Time at the library this morning and having a Joe Rogan-style episode out in public. To know there is a clear path out of my digestive tract, and to know I’m not just full of rendered fat gives me great confidence to hit the library!

Defrosting some more T-bones this morning as the fridge is getting empty. Looking forward to a big steaky lunch!

Meal One:
– 3 100g beef sausages
– 2 fried eggs
– 1 middle bacon rasher
– 50g chicken mince (I was intending to eat more but I forgot and mixed it in with the chicken fried rice I cooked for the girls!)
** My T-bones were still frozen solid by 12 so no steaky lunch as planned!** 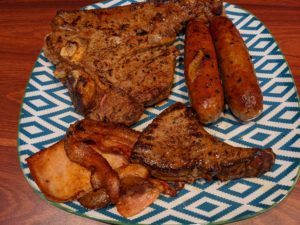 Thoughts: A couple of big changes I’ve noticed after a few days. Firstly, snot… I have become accustomed to thinking my health must be like a labrador – so long as my nose is wet I’m doing ok. From day to day I think I’d blow my nose at least a few times an hour, even when I’m feeling fine. My pockets are always loaded with tissues ready to go, a habit which seriously advantages a stay-at-home parent! Pretty much any time I eat hot food my nose runs, meaning that yes hospitality staff, I use my napkin at some point in my meal to blow my nose. (Not sorry about it – it would be good practice to assume every soiled napkin is going to be filled with some kind of undesirable substance!) Since the carnivore diet started, my nose has almost completely stopped running. I’m not sure if that’s a good or bad thing, but it is an undisputable change that has occurred.

Secondly, flatulence! Or more to the point, lack of it. On a high vegetable diet over the years I’m used to having my own brass section to accompany myself – especially in the evenings after dinner. (My wife would happily take the stand on this should she be required.) The quality of said flatulence went up and down with no rhyme and reason, but the quantity had become consistent and reliable. Since the meat started, I’m lucky to get a few out a day. This is the absolute opposite of what I expected – something like this. So if there’s anyone out there who likes me, but has been avoiding me due to gas, we’ve got a rare window of another 27 days to hang out danger-free. Call me!

I had another discovery today when I had a bit of an afternoon energy slump. I didn’t want to have a coffee in the afternoon, so I called in to the supermarket to get something to drink. I figured a sugar-free kombucha would probably be the healthiest thing available in the fridges. As soon as I chugged it I had really chest-clutching, gut burning indigestion – something I haven’t experienced at all this week with the flesh fiesta regime. Indigestion is something I experience pretty frequently throughout my life, and I haven’t been able to put my finger on what exactly sets it off. Pastry every time, thick pizza dough usually, sugar mostly (though I wouldn’t know these days – I avoid the stuff mostly), bread sometimes… I assume it’s a mild gluten intolerance of some sort. It’s one of the big reasons I’ve always been keen to experiment with my diet over the years. So… it’s a lovely realisation that it’s not meat that sets it off at all. Woo!

Those paying attention at home may remember I ordered some beef liver form the butcher on the weekend. Well… it arrived today. All 7 kilos of it. I laughed and asked if I could have a small piece, but they insisted that they ordered it in just for me; they can’t sell the stuff; and whatever I take is going in the bin. This made me nervous… 7kg of something that no one likes is going to be a tough ask. Just butchering the damn thing and getting it into freezer bags was pretty grizzly to be honest. So I watched a video about how to make liver palatable which started by saying “avoid beef liver, it’s horrible stuff” (or something to the point). Oh, if only I’d got bison liver instead! Anyhoo… it’s butchered into chunks, put in the freezer, and I’ve got a day’s worth marinating in milk (which is meant to take some of the “livery” flavour away).

I fried about 75g (a slice about 1cm think) for dinner in beef fat and butter, and tucked in, but it was undercooked and made me seriously gag. I did some quick reading and apparently it’s not a good idea (illegal to serve professionally) to eat raw liver due to parasites, toxocariasis, and Hepatitis E – none of which I’m all too keen on. So I chucked it back in the pan until it was grossly overcooked and tucked back in, wrapped in greasy bacon. I guess it’s not the worst thing in the world, but anything that can overpower bacon, butter and meat fat to the point I couldn’t taste any of them anymore is frankly a bit scary. I thought I could just bravely chuck some down the gullet each meal and carry on, but it looks like it is going to take a bit more bravery than I had originally planned. Sigh… ah well. Maybe I’ll love it by the end of the month.